A workboat motors east along the base of Estero Peak, a 5,500-foot high mountain with a spectacular rockfall on its upper face that rises from the north shore of Cordero Channel. With AIS (shipborne “automatic identification system”), an electronic system that all commercial vessels must have and pleasure craft can have (and we do), I see it on Kagán’s chartplotter and recognize its name as a fuel barge that supplies the residents, marinas, and elite fishing lodges in these remote and beautiful waters. It’s darn big, at least compared to our 36-foot, 10-inch long sailboat, but looking at it, even through binoculars, it appears to be quite small. Without binoculars, it’s barely a speck in the distance.

The scale of the mountains that preside over the channels and inlets we are making our way in is imposing. I feel humbled, and very small.
.

Kagán, the magic carpet we ride to these places, must appear as a mere mote to those who might spy us in their binoculars. Yet she’s a mote with all we need – a complete home, a home that could take us around the world. It’s all a matter of scale.

Scale is a concept I relate to as a geologist as well – there are geologic processes that create analogous forms from the microscopic to the majestic, like travertine terraces, if only we take the time to look. That is one of the benefits of summering on a sailboat, we go slow enough to take that time.

I am feeling small here, on the lone boat in a large anchorage. I ponder and write, sitting in Kagán’s cockpit with the late afternoon sun lighting the distant mountains and clouds. Then a tug and tow drifts into view, heading south in Nodales Channel. It’s another big one, but not to my eyes from here, nor can my ears catch the thrum of its engine. So big and so loud, but so small and so quiet.

What a Gifted Teacher Can DoVenus & Mars Go Sailing 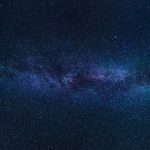