In my novel, Inundation, Will Ross, who is an engineering geologist beginning work in east central Turkey on a troubled dam, discovers a travertine deposit on his first day in the field.

Kayakale – kaya meaning rock, kale meaning castle – loomed above as Will shrugged his faded green canvas pack into a comfortable position on his shoulder. Seen from a distance the day before, he thought the stone pillar looked like travertine. The closer he got, the more it looked that way, but travertine wasn’t shown on any of the maps of the dam site.

Will squatted to inspect a boulder on the trail. Gray and rough and not distinctive to the untrained eye, the thin convoluted layers of the rock spoke of the heated waters that had dropped their calcareous mineral loads. The only hydrothermal deposits noted in the literature on the region were associated with the mines several kilometers downstream, near Kayakale village, but there was no doubt, this was travertine.

While cross-country skiing in Yellowstone in January, I also got to see travertines, fine crystalline calcium carbonate rocks formed by chemical precipitation. Common in areas with hot springs, travertines can form large terraces, like those in Mammoth Hot Springs in Yellowstone National Park and the hot springs of Pamukkale in southwest Turkey.

Generally white or tan, travertines can also bloom with color from mineral impurities. Though rough in texture in their natural forms, some travertines are prized for their beauty when cut and polished.

Refik, Will’s assistant, huffed up the trail just as Will reached for the Estwing rock pick that hung on his belt. Its handle was smooth and contoured to his hand, shaped over years of study and work. He swung the hammer. Metal rang on stone. Rock dust drifted up, depositing a thin film of grit on his lips. He blew the dust off the specimen in his hand.

“Travertine,” Will said, holding the rock out to Refik. “See how the fresh surface is pearlescent. Each of these layers,” he pointed to them, “was precipitated when hot, mineralized water daylighted and cooled. Cooler water can’t hold the minerals in solution that hot water can, so when the water flows out at the surface, minerals get deposited layer by layer.” He traced the layers with his finger. “Like this,” he said. “Do you understand?”

Will opened the leather pouch on the other side of his belt from the pick and pulled out a brown glass vial with dilute hydrochloric acid. He squeezed a few drops onto the rock. The acid bubbled in the nooks and crannies.

“See? Definitely carbonate. Not that we didn’t know that. But travertine, so close to the dam site, that wasn’t reported. And it’s a big deal. Hot water can dissolve a lot more carbonaceous rock than water at ambient temps. The implications of travertine so near the dam site are immense with respect to the foundation and abutments. More dissolution means more and bigger cavities. Exactly what shut construction down.”

That’s how Will begins his work at Kayakale Dam. For those of us lucky enough to study geology as a profession, though we may do the same work day to day – mapping or trenching or drilling – each site presents its own landscape to read, its own geologic framework to understand, and its own puzzles to solve.

I hope you enjoy this short excerpt from Inundation. The novel is now complete and I’m working on the next phase of getting it to you, my readers. Read more from Inundation.
. 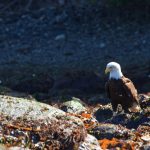 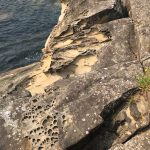 The Sculpted Sandstones of SuciaRock With Me