I feel like I’m going in three directions at once these busy holiday days, all at 75 miles per hour. It got me thinking about life on the boat, where 6 knots (that’s almost 7 mph) under sail feels fun and fast.

On an early July day last summer, Eric, his son John, and I were sailing south in Plumper Sound in the Southern Gulf Islands of British Columbia. We were on a beat, sailing upwind, making slow forward progress by tacking back and forth down the channel. In about 10 knots of wind, we moved along at 3 to 4 knots of boat speed. For context, 1 knot = 1.15 miles per hour. Boat speed is also called speed over water (which means that’s how fast the boat is moving through the water, not counting the current either pushing you along toward your destination or flowing against you keeping you from getting to your destination). Speed over ground, which is a way of saying how fast you’re getting from Point A to Point B, is the boat speed plus or minus (depending on which way the current is going) the speed of the current itself. That’s an oversimplification, but I hope you get the idea.

That day we wanted to sail (not motor) even if the wind was light, so we’d planned to haul anchor at a time in the tide cycle when we’d have the current with us, helping us along. Easing down Plumper Sound our speed over ground was 1 to 2 knots faster than our speed over water. Our plan for the day’s sail from Winter Cove to Bedwell Harbour was going well. 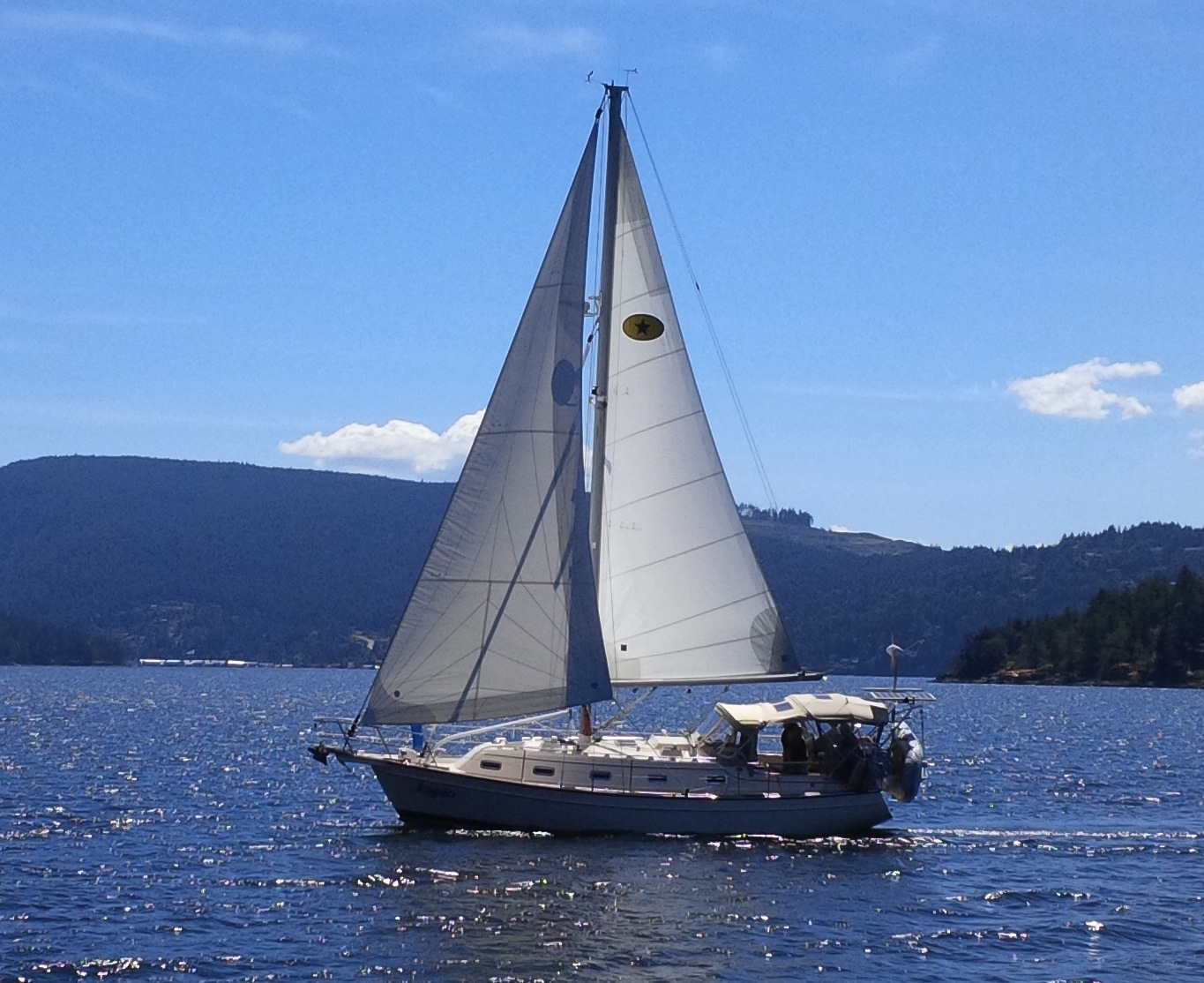 As we turned to starboard, to the southwest, into Boundary Pass, the wind eased. It was already pretty easy, then it dropped to 6 knots or less. We slowed. More. Boat speed fell to less than 2 knots. I’ve heard “under 3, turn the key” many times. The “3” meaning 3 knots and “turn the key” meaning furl your sails, turn your engine on, and motor to wherever you’re going. This applies to coastal cruising, which is what we do, not crossing oceans, which is another story altogether.

We considered motoring on to our marine park destination for an afternoon hike. But the quiet was so sweet, the sails were still full, and the current was still with us, so we kept ghosting along through the glassy water.

Then we heard it, pffft. I swung my head around. Where had the sound come from? Pffft. Again. And again. Harbour Porpoises! The smallest of the porpoises. Shy, unlike the more gregarious species that also frequent these waters, like Pacific White-Sided Dolphins who will swim right up to your boat and ride bow waves. Usually these graceful creatures don’t come this close to the boat. But usually we don’t go this slow, move this silently.

There were six of them – two off our port side, two swimming along with us in the tiny wake behind our dinghy, and two ahead.

I always thought they were deep black in color, as I’d only seen their silhouettes in the distance. But that day, I saw their skin is dappled and shaded, like the brindled coat of a dog, from brown to gray to black. Nuanced and beautiful.

And as I always seem to do when I see porpoises or dolphins or whales, near or far, I danced around the cockpit, I clapped my hands, I clasped them over my heart – delighted and reverent. I didn’t notice whether Eric and John joined in the thrill or thought I was crazy. It didn’t really matter.

Eventually, their blows grew fainter on the dying breeze, their sleek backs arched in and out of the water farther and farther from us. Becalmed, we furled our sails and motored on to the anchorage.

But what a gift we’d received – our slow passage a form of patience – an invitation to Kagán and her crew to ride the barely-there breeze escorted by a pod of porpoises. Recalling that feeling reminds me to tap into patience and go slow, even for a brief moment in a busy day. 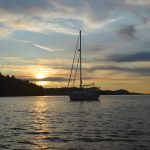