Flying into the Ring

In my last post, I reflected on moments in nature that felt transcendent to me. I listed many of them, but one, though very much in my mind and heart, I did not, could not, write about. Until now. It’s been a long time coming.

Decades ago, for not-quite three years, I was married to a man who, among his many talents, was a pilot. He owned a much-loved ’53 Cessna 180 and in it we flew to our small weekend getaway, to see his mother in Arizona several times each year from our home in east-central Texas, to geology field trips, down to the Gulf coast where we plane-camped and he fished, and to the New Mexico mountains on the occasional ski weekend.

One late summer day in 1997, flying east, back home from Arizona, while just south of the Guadalupe Mountains of west Texas, in the distance we saw two thunderstorms building. I assumed we would divert around them. But, no, he said, we’d hold our course and scoot right between them. As we approached the darkening storms, the sun and the rain converged in such a way that rainbows formed – one arching above and one swooping below – from the thunderheads on either side. Flying into the heart of the perfect circle made by those rainbows was a deeply transcendent moment in nature.

I have no picture. But in my mind, I hold the picture of those moments – flying into the ring – moments that have come to define my time with the brilliant and adventurous man who was my husband. I can see his blue eyes sparkling, his mischievous smile as turbulence began to jounce us along. And despite the fact that my hands, sweaty with fear, gripped the edge of my seat, and I fought waves of airsickness, I will never forget the gift of flying into that ring, both that particular moment and every moment, even the painful ones, of our marriage.

You might think that I’ve come to idealize this man that I adored, and it’s tempting to do so. But I believe I honor him, and our love, much more by remembering the whole of him. He wasn’t perfect, and in fact, he struggled mightily, particularly with alcoholism. Though he wasn’t in denial of that struggle, privately, he never revealed it publicly. And I feel sure, if he was here now, he would be less than pleased that I’m writing these words and putting them out in the world, perhaps for his friends and colleagues to see. But being with him made me more courageous than I was before, and it’s important to say these words, because alcoholic was not the only person he was. He was an engineering geologist who had worked all over the world, a leader in his profession, a mentor to many young geologists, a professor at Texas A&M University, an avid student of science and history, a lover of music, a photographer, a sailor, a pilot, a son, a father, a grandfather, a friend – and my husband.

Though, in years, he was quite a bit older, in spirit, he moved through, and over, the world with a youthful wonder, curiosity, and boldness that changed the way I have moved through the world myself ever since.

Just a few short months after flying home that day, he perished on a November night, beside his plane, in the Texas hill country. He flew that night, despite the potential for icing conditions, because his students were waiting for him for a weekend field trip. They could have waited. But he did not. I doubt he even considered it.

And so began the most difficult journey of my life – a month-long search for him, and then a years-long passage through grief.

Now, decades past, I hold the joy of being with him closer than the pain of his loss. I look at the sky this clear New Mexico morning, see the startling blue of his eyes, and feel him with me. I know, in my cells, that love does not die, though the beloved does. And I am most grateful for flying into the ring.

On this day, twenty years ago, Norman Ross Tilford’s body and his plane, were found by a hunter deep in the Texas hill country.

To the family, friends, colleagues, and Civil Air Patrol pilots who searched for him with me – you will always have my heartfelt thanks. 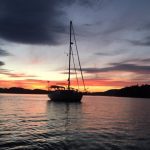 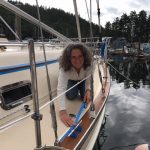