Someone says something, and you’re struck dumb. Perhaps dumbfounded is more like it. Would someone really say that? Too often it’s family—Uncle Aren’t-I-Funny? or Aunt No-Filter. Or maybe it’s Ms. or Mr. I-Don’t-Even-Know-You-And-Still-I’d-Say-That.

Haven’t we all been there?

At 2:06 the next morning, you bolt upright in bed, your voice restored, the perfect line drops from your lips with no one but the beloved four-legged curled up at your feet to hear it. Or maybe your partner rolls over and mumbles, “What?” then snuffles and falls back to sleep, heedless of your brilliant retort.

Even though that is so often the reality for me, as a writer I get to say that perfect line—on the page. Sometimes on a page in my journal, my snappy (if hours or days late) comeback for me alone, but sometimes on a page others will read.

The perfect line that sticks in my mind most came to me 25 years ago. Some of my readers know that my husband, Norm Tilford, died in November 1997. Some of you know he perished when his small plane went down in icing conditions in a remote part of the Texas hill country. And some of you may even know it was a month to the day that his plane, and his body, were found by a hunter who noticed that the top of a tall tree looked different, broken, since the last time he’d been out that way (and he’d read the ad I’d run in the Blanco County News, among many other rural newspapers, asking people to look for the plane).

During the month Norm was missing, hundreds helped with the search—Civil Air Patrol pilots, family, friends, professional colleagues, and even kind strangers. It was much publicized, a choice I made in the hope that the more who knew, the better the chances someone would find the plane, and Norm. Small planes are hard to spot in big country, and I dreaded being one of those stories in which it was located too late, a rescue turned to a recovery.

Upon arriving home after a day of searching lake shores for debris, the phone began ringing as I unlocked the door. I ran to pick it up and “someone” said that “something.”

It was decades before I could write about it. Here is an excerpt from the personal essay I titled Not the Real Estate (evoking Norm’s oft-spoken belief that “home is where we both are, not the real estate”):

I worked with the Bryan Police Department, depending on Zeta, the officer who worked on their missing person cases. She leveled with me from the start.

“More often than we like,” she said, “these cases have a negative outcome.”

She gently asked questions about our marriage, made helpful suggestions for the search, and provided perspective I didn’t want to hear but needed to. She conceded, reluctantly, her large brown eyes wide and caring, there was always a chance.

I fielded awkward phone calls from people projecting their private dramas onto my all-too-public one. One woman matter-of-factly informed me that my husband wasn’t missing at all.

“Your husband ran off with one of his students,” she said, “a new young honey, just like my husband did. He’ll call to dump you, dear. Don’t spend your time worrying. Get a lawyer.”

Stunned anyone would make that kind of call, I stammered, “Thank you for your concern?” before hanging up. Minutes later, I came up with what should have been my response, “No, ma’am, Norm hasn’t run off with a young honey. I am his young honey.”

That was my perfect line.

Just to be clear, I did not steal Norm from another woman, older or otherwise, though I was quite a bit younger than he. Any stealing that went on with us was of each other’s hearts—thefts of the best possible kind. Twenty-five years later, his fearless heart still inspires me to fulfill dreams—one he gave me, to sail, and one I had that Norm never failed to encourage, to write.

Note: Not the Real Estate was published in bosque 9 literary journal in November 2019. If you’d like to read the complete story, among many other fine essays, short stories, and poems, the issue is available for purchase here.

In the Face of InevitabilityFinding the Words 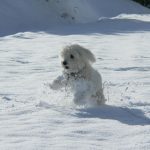