Though it doesn’t occur beneath my feet unless I climb long and hard and high (as I did here), it’s my bedrock. The Madera Limestone crowns the rift-flank Sandia Mountains whose shadow I live in. I arrived here, shattered, after my husband died in an accident 22 years ago. Rebuilding a life, slowly, as I built a new home, stone by stone, adobe brick by adobe brick.

Years later, I walked the foothills every morning after surgery and during radiation treatment for breast cancer. The beauty and quiet replenish me when I’m depleted.

For the past year, I’ve had a great honor in my profession. I’ve served as the 31st Richard H. Jahns Distinguished Lecturer in Applied Geology, only the second woman in all those years to do so. What a privilege! Traveling to 25 states since October 2018, I spoke with students from 52 colleges and universities, letting them know that environmental and engineering geology is a profession in which they can make a living and make a difference. It’s been fulfilling. And exhausting.

This morning, I feel lucky to wake in my own bed, not wondering what city I’m in when my eyes flutter open. Not in a city at all. I walk a while, then sit myself down, my back against a sun-warmed boulder of Madera Limestone, grateful for this bedrock.

Formed 300 million years ago, when an ancient inland sea, nothing like today’s high desert landscape, filled this space. Skeletons of the more than 90 species of creatures that populated this ocean delight me today as fossils I happen upon on hikes. Brachiopods and bryozoans, corals and crinoids, to name just a few. The steel gray limestone itself, the intercalated golden brown chert, all remains (most in carbonate, some in silicate, form) of the rich marine life of that time.

Its journey to the top of the mountains, an epic – first, deposition in that long-ago sea; deep burial and lithification; later, rifting (tectonic extension) on the order of 30,000 feet of displacement on the rift-bounding faults; the angle of the faults (60-70 degrees from horizontal) resulting in the escarpment that defines Albuquerque’s skyline to the east – hundreds of millions of years in the making.

The shifting of tectonic plates, the advance and retreat of seas, the comings and goings of geologic time – though always moving, are also my bedrock, intellectually and philosophically. The enormity in scale and time, compared with my infinitesimal place and passing in the scene, is fascinating and freeing. The time I take to wander these trails, also time for mental meanderings. So good to be home, feeling this foundation beneath my boots, walking these trails, talking with you.

Tell me about your bedrock.

[Read more about the stunning Sandia Mountains in The Geology of Northern New Mexico’s Parks, Monuments, and Public Lands from the New Mexico Bureau of Geology and Mining Resources]

The Sculpted Sandstones of SuciaRock With Me 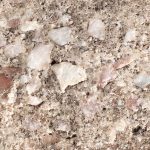